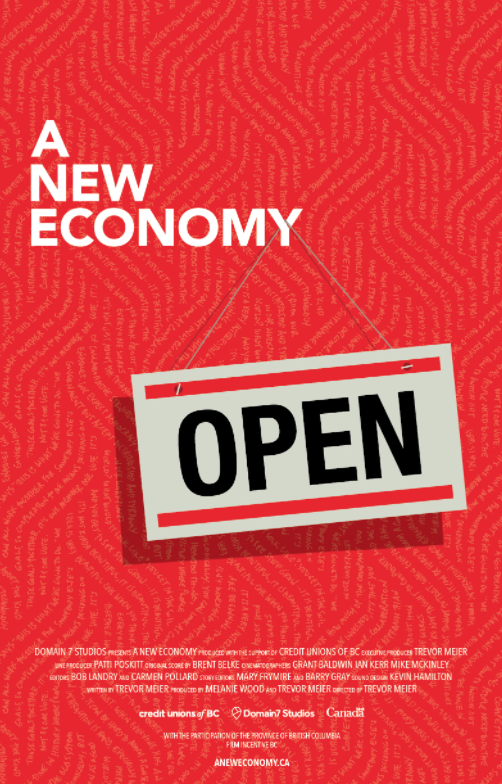 Big things happen when humanity is at the core of business. Can cooperation save the World?

What if working together for the good of all was the most common business model? Watch as several organizations strive towards building a more cooperative future. By putting humanity before the bottom line, they are finding their place in a new economy no longer dominated by profits and big business.

A New Economy features seven interwoven stories. Among them are a small craft-brew coop, a peer-to-peer open hardware lab and an urban agricultural social enterprise:

London Brewing Co-op follows five guys who love beer as they jump-start a tasty craft-brew cooperative within a local sustainable food ecosystem in London, Ontario. While they face the challenges of starting a new business and learning to work together democratically, several members are also starting new families while the group wrestles with the day-to-day struggles of growing the enterprise to a sustainable size.

Sensorica follows a Romanian laser physicist with a big heart who works collaboratively with other high-tech professionals in Montreal, Quebec and around the world to prototype new socially responsible technologies while at the same time developing a whole new type of democratic open-source peer-to-peer organization—the open value network.

Sole Food Street Farms follows a Vancouver, B.C.-based social enterprise transforming the way we work and eat by adapting unconventional urban spaces for large-scale food production— with a social twist. While hailed by local chefs as the best produce in the city, many of Sole Food’s dozens of employees face barriers to traditional employment. Their unique model creates both an equitable and fair workplace that understands their needs while producing transformation and healing through the creation of a high-quality product.

In addition, a string quartet weaves beautiful music together with conversations on the core rewards of cooperation. Other stories examine housing, public spaces and the use of technology in building community – all the while blending the economic and social needs of a functioning new economy with cooperative values and principles as its base.

Come along for an evening of shared food and conversation, followed by a screening of 'A New Economy'

"Sharon is an urbanist and activist with a background in theecological cities movement, who works to build the sharing and collaborative movement in Australia and beyond. In 2012, she set up Share Adelaide to curate sharing ideas and news for South Australia. She has worked in State government in South Australia for over fifteen years, in roles including environmental planning, greening of government, resource efficiency and collaborative economy. During this time, she established the Ecological Footprint concept in the state, which was later incorporated as a target in the Strategic Plan for South Australia; initiated Share N Save, a digital platform to map community sharing activity, which has since been made open source; and successfully advocated for funding for community based shared fabrication spaces. Sharon was selected as a Sharing Cities Fellow by US-based Shareable and contributed to the Housing and Mobility chapters of their 2017 book, 'Sharing Cities: Activating the Urban Commons'." - AUDAcities

* Choose to refuse single-use plastic. During our dinners we provide real plates and cutlery, provide reusable cups, supply filtered water and collect food scraps to give to The Joinery's chickens or put in our compost bins. Please avoid bringing single-use plastics, including glad wrap, to our dinners if you can. We look forward to seeing you!